The multi-faceted Culverhouse Community Garden has developed a new composting process, and it’s producing what the gardeners say is superior soil for organic gardening.

The process specifically involves a series of bins and some chemistry, but there’s another chemistry as well — that of a group of dedicated volunteers interacting across the community with vegetable retailers, juicers, coffee houses and even a horse rancher. In a way, it’s a model of a sustainable method of recycling food waste — a scalable model that could be expanded upon. 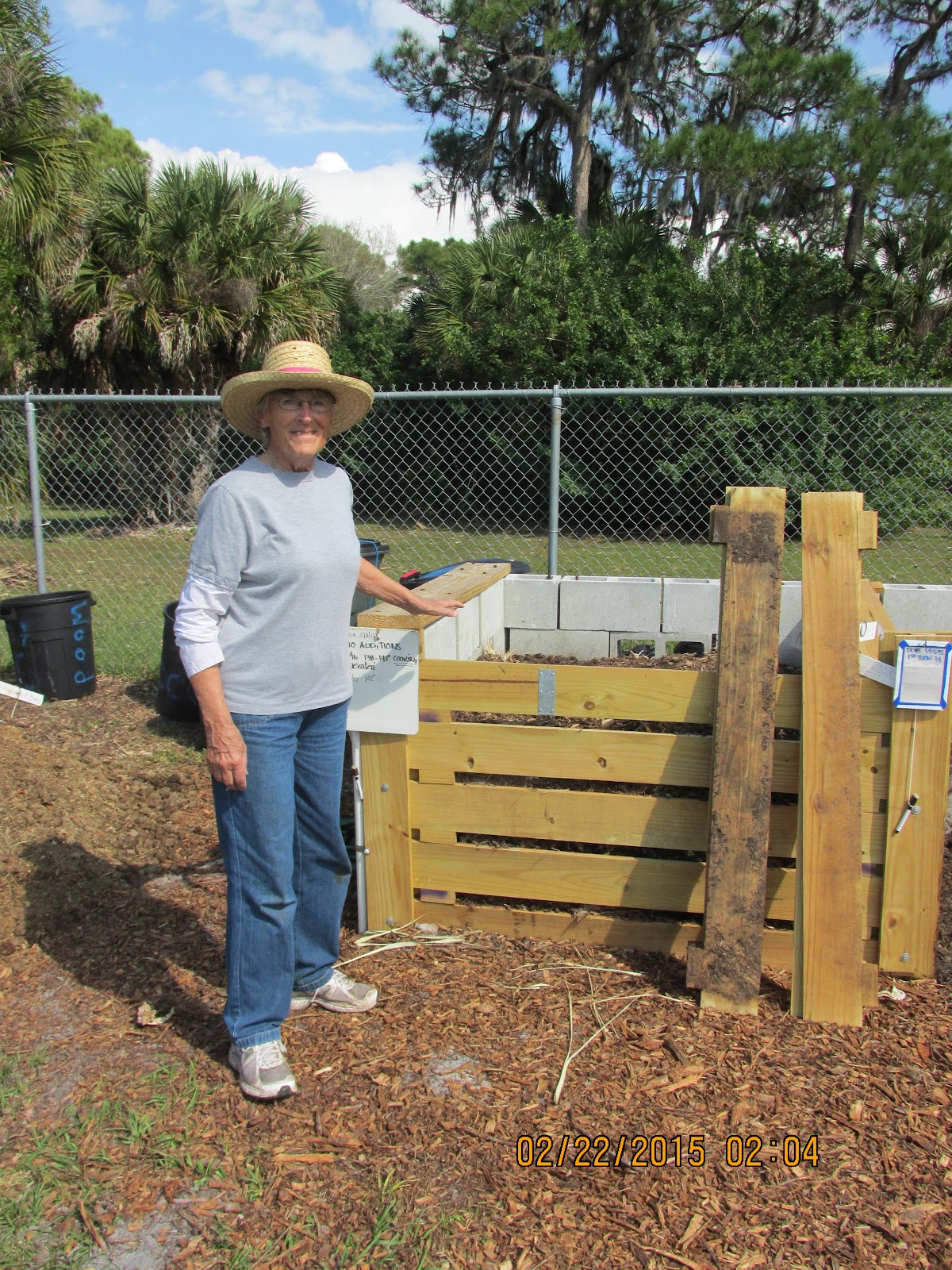 Friends’ News recently visited the Culverhouse garden, a FOSCP Chapter, and got an up-close look at their new serial bin process. It’s a joint effort spearheaded by garden members Roxane Ortman and Marcia Freeman (pictured) that utilizes the volunteer efforts of 24 Culverhousians to achieve the rich and fertile result.

The gardeners used rebar-reinforced concrete blocks (purchased with garden dues) to construct three low bins. The first bin is where the  alternating green and brown compost “lasagna layers” — are laid down.

Each layer is about 4” high, and will harness the chemical reaction generated from the mix of four ingredients: carbon, nitrogen, oxygen and water.  The greater the surface area of the materials used in building the pile, the more rapidly the decomposition process accelerates, says Ortman.

The compost has to be “built” — that’s Ortman’s word — by carefully balancing the key elements:

The composting process is powered by microorganisms and further assisted by the Florida sun. The initial target temperature of the pile is 140 degrees, but it will get as high as 160 degrees —  the trigger temperature to aerate the pile. That heat is necessary to kill any weed seeds and pathogens in the materials. Under the high temperatures, water turns to vapor and evaporates. More water is added to drive the process forward.

As the ingredients bake in the sun, and while the microorganisms do their part to heat the pile, the cinder blocks allow air to penetrate. Volunteers use broom handles to poke the pile, expanding the area exposed to air. The aim is to strike a balance that allows aerobic bacteria to break down the carbon and nitrogen.

The piles’ “Date of Birth,” recent temperature and waterings are tracked on charts: 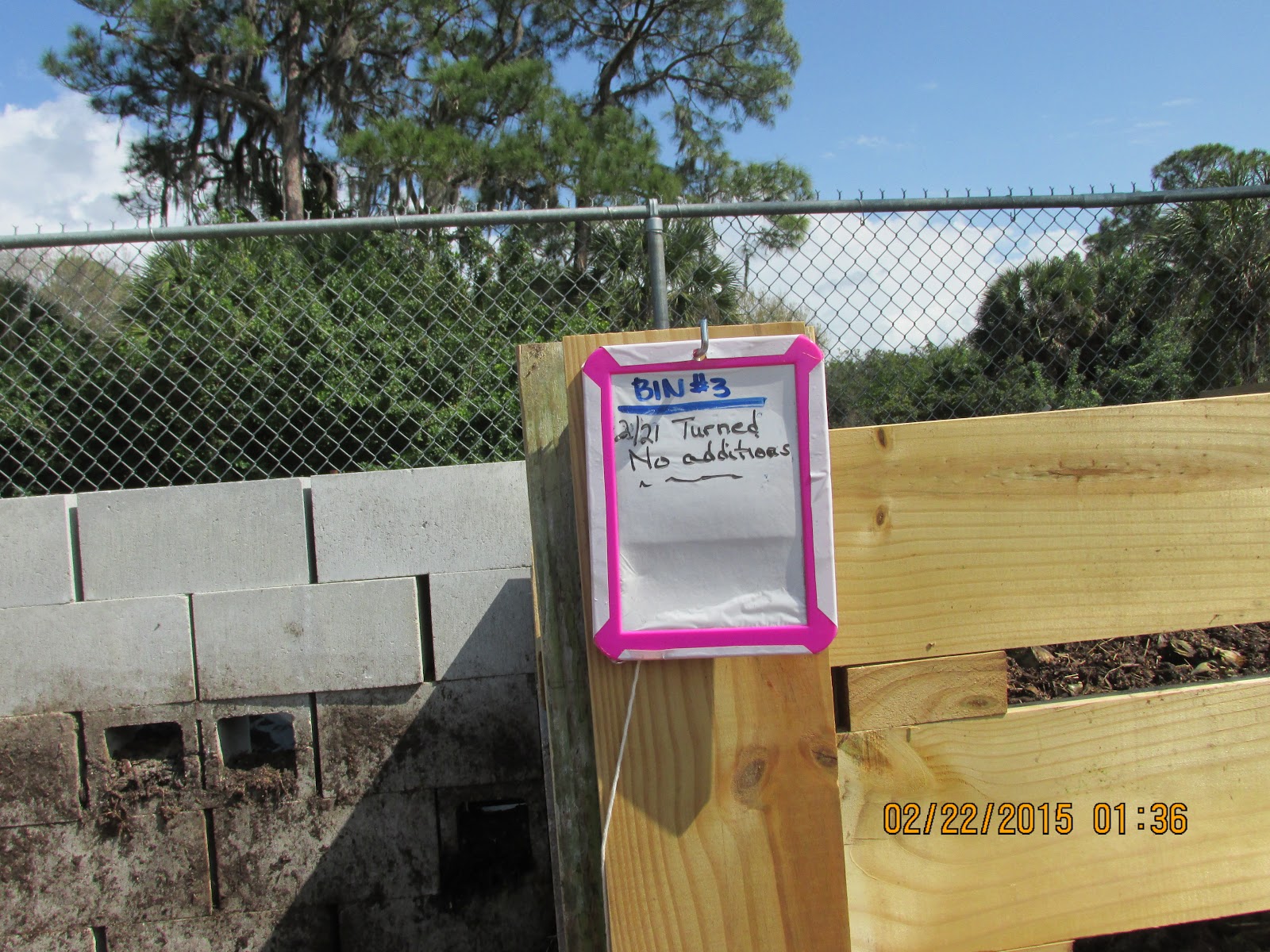 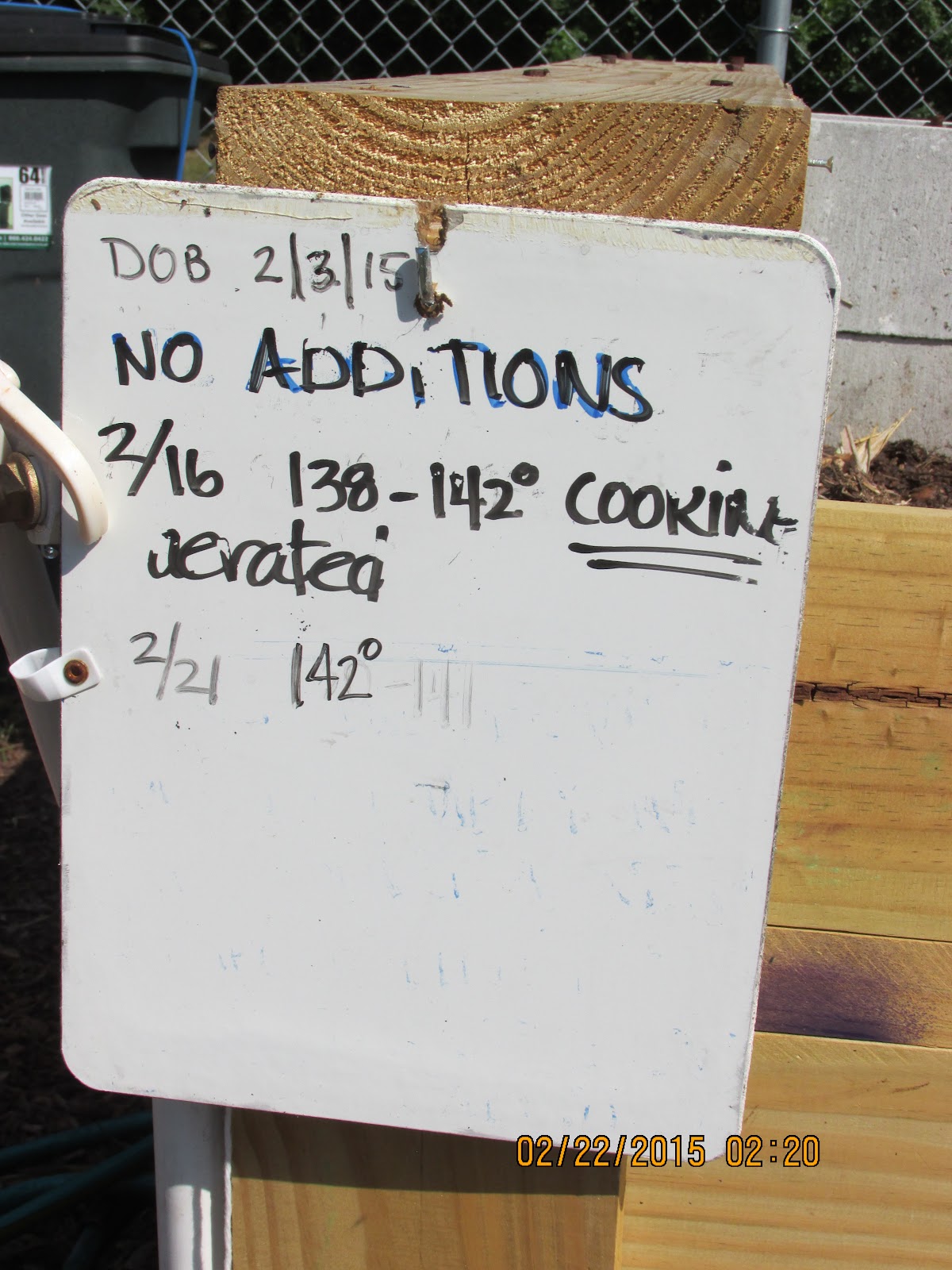 Then the turning begins. Members of the composting group adhere to a schedule to turn the compost, aerating and hydrating the mix. After two weeks, the contents of the first bin are moved to the second bin, and again moistened, aerated, and turned.

At the start of the fourth week, the pile is again turned and moved to the third bin. The target temperature is lower now; there’s less brown and green stuff to cook, as most of the chemical transformation has already taken place thanks to the microorganisms. When the temperature remains steady at ambient temperature, it’s ready. A process that might take three months in Vermont is completed here in six weeks. “It’s a tremendous chemical process,” says Freeman.

In a pile beyond the third bin is the result: Rich, dark, damp, earthy, loamy soil — the perfect combination to produce vegetables with flavor and soul.  It is at this point that earthworms will enter the pile as they prefer a habitat with temperatures in the 80’s or below. “When I see worms in the finished product I know we are doing something right,” says Ortman.

It takes a community 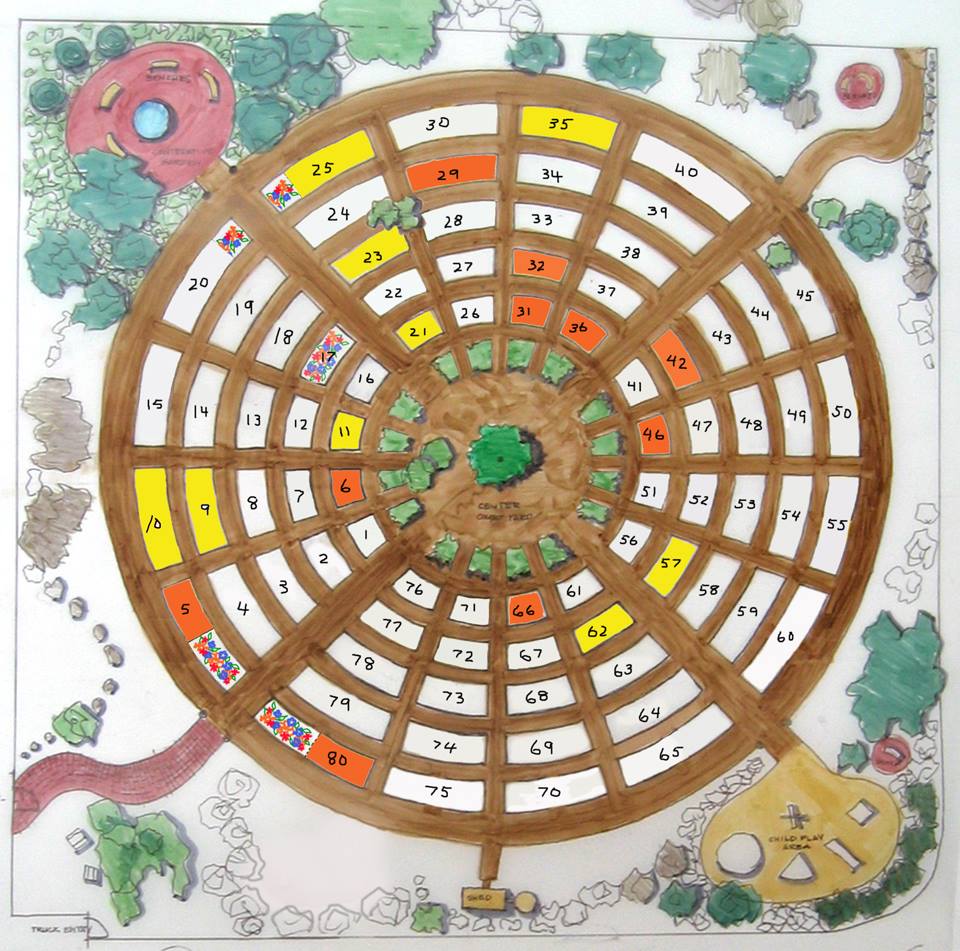 That’s the process, but there’s more to the story. For one thing, it took a diversity of talents to make this happen. It began when individual gardeners started making their own compost piles. Later, a small team began a compost pile called HERB, using chicken wire. Moving to the series of bins involved Freeman, a former science teacher and author, as well as Ortman’s zeal for composting. They called upon a variety skills of volunteer gardeners to build the walls, engineer a water line, and source the basic ingredients. Ortman works for a local health food grocer and brings food waste; a team of six brings coffee grounds from Starbucks and Bagel Cafe, and still others bring greens from CROP in Gulf Gate. A man with horses drops off an offering of manure and bedding regularly.

It turns out that Culverhouse Community Garden is more than a group of folks who like gardening. Drawing on the multiplicity of talents, know-how, social connections, and muscle of its membership, it operates like an experimental agricultural station, but one with a mission. If its end products are savory fruits, vegetables and herbs for healthy organic cooking, they have their roots in this “tremendous chemical process” that turns communal labor and recycled stuffs into the best cooked earth a vegetable could ask for.

And that process is rooted in a concern with health, along with a dedication to real organic sources, to collective networked labor, and to sustainability.

Ortman recalls taking a class where she learned about the amount of food from homes and businesses that goes to the landfill. “It was alarming,” she says.

What’s begun at the garden could expand with the right guidance and vision. Ortman envisions a day when no food waste ends up at the landfill, because it’s being used to produce rich new soil. “I really want to see Sarasota go here,” she says.